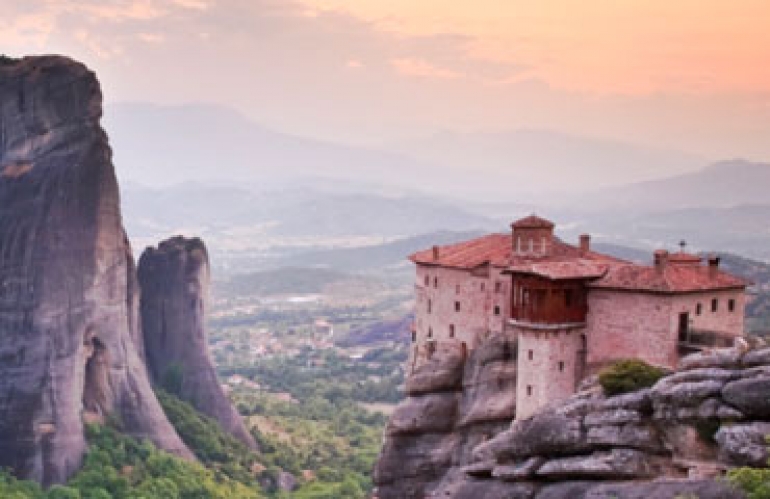 The Meteora (suspended in the air or in the heavens above) is one of the most spectacular and unique rock formations in the world. Immense monolithic pillars and hills like huge rounded boulders dominate the local area. It is also associated with one of the largest and most precipitously built complexes of Eastern Orthodox monasteries in Greece, second in importance only to Mount Athos. The six monasteries are built on natural sandstone rock pillars, at the northwestern edge of the Plain of Thessaly near the Pineios river and Pindus Mountains, in central Greece. Meteora is included on the UNESCO World Heritage List under criteria.

1) Holy Monastery of the Transfiguration of Jesus, the Great Meteoro.

It was founded in the middle of the 14th century by Holy Athanasios the Meteorite (first owner and organiser of the Monastic coenobium) at the largest rock (Wide Rock).

His successor and second owner of the Holy Monastery was the monk, Holy Ioasaf, former “king” Ouresis John, son of the Serbian-Greek “king”, that resided in Trikala, Simeon Ouresis Paleologos.

At the sanctum of the catholic there are important frescos of the Macedonian school and the remarkable frescos of the main church and the narthex are believed to be created by Georgie, student of Theophanous the Cretan.

At the above Holy Monastery are the chapels of the Mother of God (Virgin Mary of the Meteorite Stone), of Holy Baptist, of Saint Equal Apostles Constantine and Helen and of Saint Nektarios (more modern).

The most important buildings are the centre (kitchen), the old age home, the “trapeza”(dining hall) and others.  At the Holy Monastery of the Great Meteoro there is a remarkable and rich collection of manuscripts, icons and holy heirlooms.

Located opposite the Great Meteoro. Its founder is the hermit Varlaam in the middle of 14th century. Later, it was renovated by the brothers Theophanis and Nektarios Apsaras from Ioannina.

The catholic of the Holy Convent is in the honour of All Saints and was built by the monks and brothers Theophanis and Nektarios in 1541-1544. The frescos of the catholic are created mainly by Fragos Katelanos from Thebe.

There is also the chapel of the Three Hierarchs built upon the first small church that the hermit Varlaam built. Important constructions are the old “trapeza”(dining hall), the Centre (kitchen) and the Old Age Home (hospital). Moreover, at the holy convent there is a remarkable and rich collection of manuscripts, icons and sacred heir-looms.

It was at first a male Monastery, but since 1961 there has been a sisterhood. Owners are Holy Antony, in the early and mid 15th century and Holy Philotheos, who, in the middle of the 16th century, rebuilt the church of Saint Stephen.In the 16th century, the first frescos of the church are also created.

After 1798, under Bishop of Stagi Paisios from Klinobo of Kalampaka and of the abbot Amvrosios, the present catholic was built in the honour of Saint Charalambos, whose blessed skull is kept there as the most sacred and miraculous heirloom.  The frescos at the catholic are created by Vlasis Tsotsonis, perhaps the most important modern hagiographer.

At the Holy Convent of Saint Stephen, in the old “trapeza”(dining hall) that has turned into a museum, there is a remarkable and rich collection of manuscripts, icons and sacred heirlooms.

It is located in one of the most impressive rocks of Meteora. Already since 1362, it has been an organised monastery and the catholic was built in 1456-1476. The present frescos were created by the brothers Antony,a priest, and Nicolas in 1741.  At the narthex there have been frescos since 1692.

It was at first a male Monastery, while now is female. The first owner/owners built the Monastery in the 14th-15th century.

It took its present form in the early 16th century, by the monks and brothers Ioasaf and Maxim from Ioannina. The catholic is devoted to the Transfiguration of Jesus. Also, the memory of Saint Barbara is honoured (4th December). The frescos are remarkable and are created by an unknown hagiographer influenced by the Cretan school under the monk Arsenios, (perhaps by Georgie, student of Theophanis the Cretan).

It is the first Monastery (at our left) that we meet as going up to the Holy Meteora. Its foundation goes back at the beginning till the middle of the 14th century.

The catholic was made under the Metropolitan of Larisa Saint Dionysus the Merciful and under the abbot of Stagi, Monk Nikanoras.

In 1527,the completion of the hagiography of the Catholic took place by Theophanis the Cretan, who is included in the most important hagiographers of Orthodoxy.  At the frescos we can see the great perfection in the designing of the figures and the excellent chromatic reproduction.