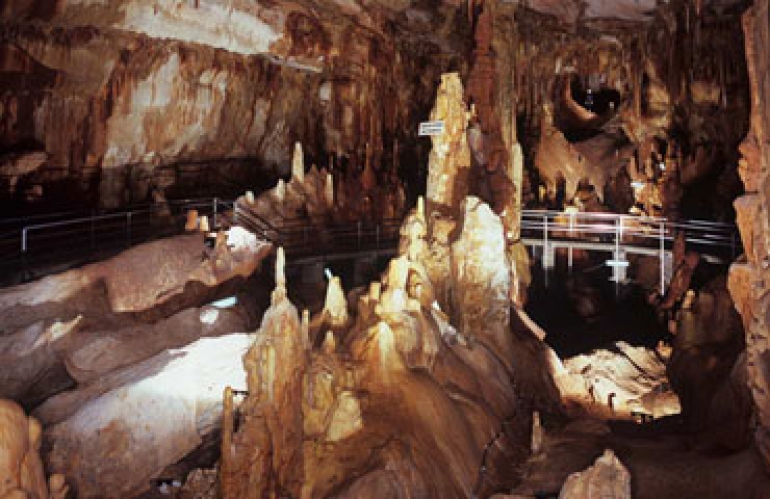 The bejewelled with stalagmites and stalactites Petralona Cave has been developed on the western side of the limestone Katsika mountain (~700 m height) and 300 m above sea level. The Cave was spotted in 1959 by the inhabitant of the Petralona village Philippos Chatzaridis and it became internationally known when the fossilized skull of Petralona man was found by a group of six men (three of them scientists), guided by another villager, Christos Sariannidis.
The systematic excavations in the Cave started in 1965 by the founder of the Anthropological Association of Greece Ph.D. professor of anthropology Aris Poulianos. His research proved that Petralona Archanthropus (i.e. an archaic Homo sapiens) has an age of about 700.000 years ago, which is the oldest known Europeoid man. This chronology is based on the detail analysis of the Cave stratigraphy (until today 34 geological layers have been excavated). Also, it is based on the study of the Palaeolithic tools, as well as the exact diagnosis of the Palaeofauna species, which have been discovered in almost all layers.
Among the fossils of the extinct species found in the Cave lions, hyenas, bears, panthers, elephants, rhinos, megacerines, bisons, and various species of dears and equids (horse like) are included, as well as 25 species of birds, 16 species of rodents and 17 species of bats.
A considerable aid, in reconfirming the age of the Petralona man is the contribution of the methods advanced by nuclear physics. The materials used for such a purpose were bones, argil, stalagmites and ashes. The later are traces of fire - the earliest, which have ever been lightened by human hands on earth.
All fossils and the other findings are deposited in the adjacent Anthropological Museum, which you may also visit here in a separate iconic web sightseeing.
www.petralona-cave.gr
Read 1722 times Last modified on Wednesday, 23 May 2018 18:41
Tweet
More in this category: Meteora/ ΜΕΤΕΩΡΑ from 40 € »